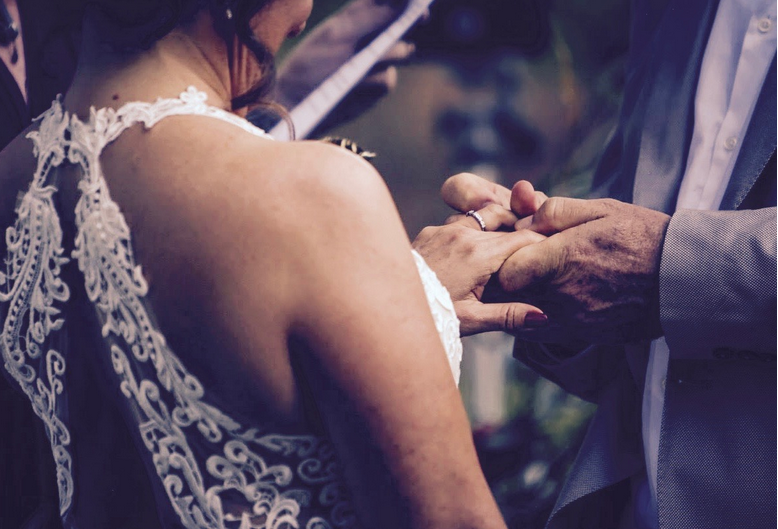 The day before our national “Independence” holiday and within hours of the New Moon eclipse, my wedding rings disappeared.

It seems they didn’t want to be married to me anymore. They wanted their freedom. They were eclipsed.

I’m not the kinda gal who misplaces things. I’m the one who not only tracks my own stuff but everyone else’s. I usually have the answer to the question, “Have you seen my…..?”

I remember getting into bed and putting the rings on my nightstand before moisturizing my hands and falling asleep. It’s about the only time I take them off.

Yes. As you probably know, I got married last Fall. My beautiful, simple band of small diamonds was exactly what I wanted. Our two rings, together in a sheer pink bag, were passed from hand to hand through every row of guests and blessed by each person there. Then we placed them on each other ring fingers.

On my right hand I wore my “Inner Marriage” ring. It held the diamond my dad gave to my mom when they were married in the early 60’s. She gifted it to me when I got engaged in my 20’s because my first husband and I couldn’t afford one. We designed a very special wedding ring around it.

Many years later, we redesigned that ring for a rededication ceremony when we renewed our vows.

Then he chose to leave our marriage and I stopped wearing that ring when everything fell apart. I realized that I had no idea what marriage meant. I felt that somehow I had become divorced from something vital and fundamental in myself. So I rededicated myself to the only marriage I felt I could ever count on: the primary one, me with Spirit, with my own sacred union of Shiva and Shakti inside of me.

In celebration of that commitment to myself, I took the diamond out of the ring, scrapped the rest of it and designed a brand new one. I based it on on the six pointed star because that’s the sacred symbol of the heart chakra. A yang triangle pointing upward to the heavens, overlaid with the yin triangle pointing down to the earth. I put a tiny ruby at the “yoni” point to remind me always to keep my divine feminine on top.

The artist I worked with said the creation of the ring was mystical; she kept feeling the presence of Isis while crafting it. The ring was completed the day before my 44th birthday. I had a wild ceremony with my goddess sisters and married myself, powerfully claiming my own sovereignty. I’ve been wearing that ring for ten years.

We turned the house upside down. Tore the bed apart and up-ended the mattress. Picked through the dirt and hair balls in the vacuum canister.

No one else had been in the house during the 36 hours between when I took the rings off and I realized they were missing.

Except a new housekeeper.

She had impeccable references. I spoke personally to 3 of them–all professional women locally who said they trusted her completely, that she’d been cleaning for them for many years. I liked her immediately. We had the nicest connection. I made her an excellent cup of coffee with organic cream and we talked about her 3 kids. I gave her a crisp $100 bill when she walked out of the house. She did a fabulous job too. I was so pleased.

I called her several hours after she left to see if she had any ideas about where they could have gone. She told me how sorry she was I was dealing with this. Hoped I’d find them soon. Told me to keep her posted because “now she was curious what happened to them.” Said she’d never seen them while cleaning. I believed her.

Because how could my intuition be so wrong? Nothing in my guidance system had raised a red-flag with her.

I searched for another explanation. I cried a lot of tears. I bounced from disbelief to denial, anger to grief.

In a dark moment, I put a curse on “whoever” took the rings (being careful not to name the cleaner since I didn’t have any proof it was her). I didn’t know that I knew how to level a curse. But I was pissed off, freaked out and feeling violated so I hissed something like, “To whomever may have stolen my wedding rings, know this: all the love they represent will come to nothing but dust and misery in your life!”

But the next day I woke up feeling nauseated and defeated, which finally ushered in surrender. I started to grapple with the deeper reasons this might be happening. It was time to let go. To trust. To return to love. Because the alternative was just too damn painful.

Then I remembered the curse. Holy crap. That is not who I am. I apologized to the universe. I removed the curse. I changed it to a prayer: “If someone took my rings, then I surrender them to you and their fate. They have been so precious to me and given me such joy. May they continue to be a blessing wherever they are carried…”

I filed a police report. Changed the locks on the door. I confronted the cleaner again more directly with a request that she return the rings if she took them and told her why they were so important to me, how devastated I was. She again vehemently denied having anything to do with it.

I keep holding onto the possibility that maybe they’d just show up. Although everything points to the cleaner, it’s still just very hard for me to believe she would do that.

Maybe it was the faerie folk? I made offerings to them at my creekside altar: flowers, incense and ripe red cherries. As my dear priestess sister, Kalila said, “Lisa, sometimes things just disappear.” My rational mind and the control-freak girl who’s totally organized, we’re not really buying this explanation. My soul-self though readily acknowledges the incomprehensibility of the great mystery.

It’s so paradoxical how the flip side of loss can be liberation. I’m not talking about some stupid “it’s all good” bullshit. I’m talking about what happens when you truly love something (or someone) with all your heart and you’re asked to sacrifice and let go. The initiation that comes through the fire of that intensity.

A friend gently suggested that I look for the gift in all of this and in the moment she said it, I wanted to whack her. But it’s true. If you look, the gifts are always there. None of it makes sense but here are some other pieces of this mystery:

Here’s what rings true: this is a full circle moment.

I’m wearing the new ring. It doesn’t feel like “mine” but I’m very grateful to have it. Mom suggested that we use it to design a new ring and that feels right.

What also rings true for me is that I no longer need two wedding rings, one for my autonomy and one for my union with my husband. Perhaps this is an invitation to create a sacred symbol of my fidelity to Love: of my Beloved and my own soul, in one.

What rings true for me is that this sacrifice is in service to something significant on many levels. They say the eclipse portal delivers just this kind of medicine. The grief, loss and violation are bitter pills to swallow. But the sweetness of realizing that the real marriage lives in this heart, fragile and fierce, that knows how to grieve and let go and love. And that can never be taken away.

I hesitated to share this story because on one level, it just smacks of privilege: white girl with a housekeeper whining about losing her diamonds. Fair enough.

But I risk sharing this story with you in the hope that it touches something inside of you, opens your heart, perhaps brings us a little closer together. There has been tremendous healing in the telling of it, so thank you for listening. My deepest longing, though, is to serve the awakening of your sacred feminine, your Shakti. Goddess feels like she’s all over this story so may you take away from it whatever She most wants you to hear.

Here’s another very strange twist in the plot. I’ve been writing and rewriting this piece for several weeks now. I finally deemed it complete and was just about to share it with you when I got a flat tire. Which put me at the tire repair place at 8:15 on a Monday morning. That’s about the last place you’d expect to find me early on a Monday morning. I finish my business at the counter, turn around and the cleaning lady is standing in line right behind me.

So we very awkwardly say hello. And start talking because there’s no other option. We talk for 30 minutes. I get to look deeply into her eyes and what I see back is sincerity. I hear her tell me over and over again how she had nothing to do with the missing rings. She even says she’ll come over and help me look for them because she’s so positive they will show up. We share a hug at the end.

I believe her. I want to believe her. It gives me renewed hope that the rings will show up, somehow, somewhere. Renewed hope in humanity, in my own intuition and instinct. I tell her how strange this whole thing has been and that, for whatever reason, she and I had this date with destiny, this intertwining of our karma. That I so hope I can call her and tell her I found them. She says she’s praying for that too.

Maybe I will never know. What rings true is that our threads are intimately interwoven with each other, that the mystery is there to help us surrender our compulsion to comprehend, that loss always makes room for something new to arise in. And so it is.

It is such a great privilege to be in communication with you. I’d love to hear from you so please give into the temptation to reply or post a comment.

With all my love, 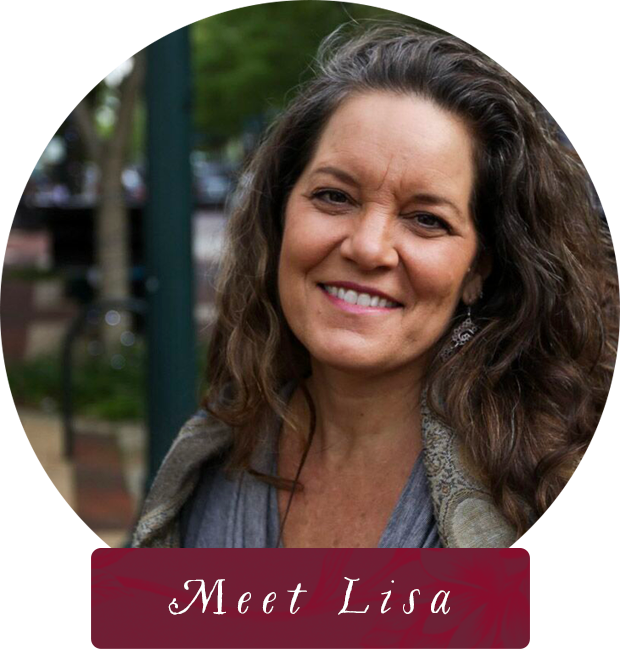 I invite you to remember that Shakti, your divine feminine life force, is alive and well, in your body, heart and soul. It is my passion to support the awakening of more love on this planet. And that begins with you. May you be blessed, nourished and resourced by what you discover here.

Any cookies that may not be particularly necessary for the website to function and is used specifically to collect user personal data via analytics, ads, other embedded contents are termed as non-necessary cookies. It is mandatory to procure user consent prior to running these cookies on your website.